My favourite beer festival of the year is, without a doubt, Ealing Beer Festival. Every year they line up an amazing selection of beers, decent food and allow us to enjoy it all in the peaceful surroundings of Walpole Park in Ealing. If you're going to go to only one beer festival, then it should probably be this one.

This year, it's running from the 2nd of July (Wednesday) to the 5th (Saturday).

Typically there are around 300 beers on offer at Ealing Beer Festival, plus a selection of cider and perry for those that way inclined. Even if you attended all four days and only drank thirds of a pint you'd never get around to trying them all.

I like to try lots of different beers, especially from unfamiliar or interesting breweries, but after a couple of pints and with so much choice, it's easy to be lazy or revert to choosing beers because of their funny names. To counteract any tendencies I have towards laziness, I go to Ealing with a plan.

Unlike some beer festival organisers, those behind Ealing Beer Festival publish a detailed beer list as a PDF, complete with tasting notes. This allows me to read up in advance and prepare my own reduced list. As the Ealing website changes from year to year, I've mirrored a copy of the 2014 beer list as an example.

The 17-page document might look a bit daunting to pick through, but in reality it only takes about half an hour, and the colour-coding makes it easy to ignore things that I have no interest in (like fruit beer and mild). To me, this is an acceptable amount of preparation time, probably not significantly more so than if I read it at the festival itself.

I'll usually home in on breweries that I recognise to find a few "safe bets" and to see if they have anything unusual on offer, and then I'll broaden my horizons a bit by looking for breweries and beers that sound interesting or that I think my friends and I will really enjoy.

In the past, I've copied and pasted my beer choices into a text file, complete with descriptions and ABV. While quick to prepare, this approach comes with a big disadvantage; you end up reading the descriptions on the day, usually over and over again, when what you really want to focus on is enjoying the beer (and hopefully the weather).

I also found it difficult to remember which of the choices were my "safe bets" (for the purposes of making recommendations) and which were more adventurous.

Last year, I decided that if I'm going to spend time preparing a list of beers I want to try out, it needs to be easier to use and more fun to compile. I also wanted to make it more useful for my friends and colleagues, some of whom have different tastes to mine.

At a glance, I wanted to be able to see:

The solution I ended up with was a Euler diagram, composed of three sets "Light / Hoppy", "Bitter" and "Dark / Malty / Stouts" from left to right. I stopped short of a true Venn Diagram because (at least in my mind) there's no intersection between "Light / Hoppy" and "Dark / Malty / Stouts" - they are fairly contradictory concepts. I'm sure there are edge-case beers that would fit, but I've not found any yet.

To classify a beer as a "safe bet" or more adventurous, I simply drew a horizontal line through the middle of the diagram; anything above the line is safe, anything below the line is adventurous.

Here is my Ealing Beer Festival 2014 diagram (click for full-size): 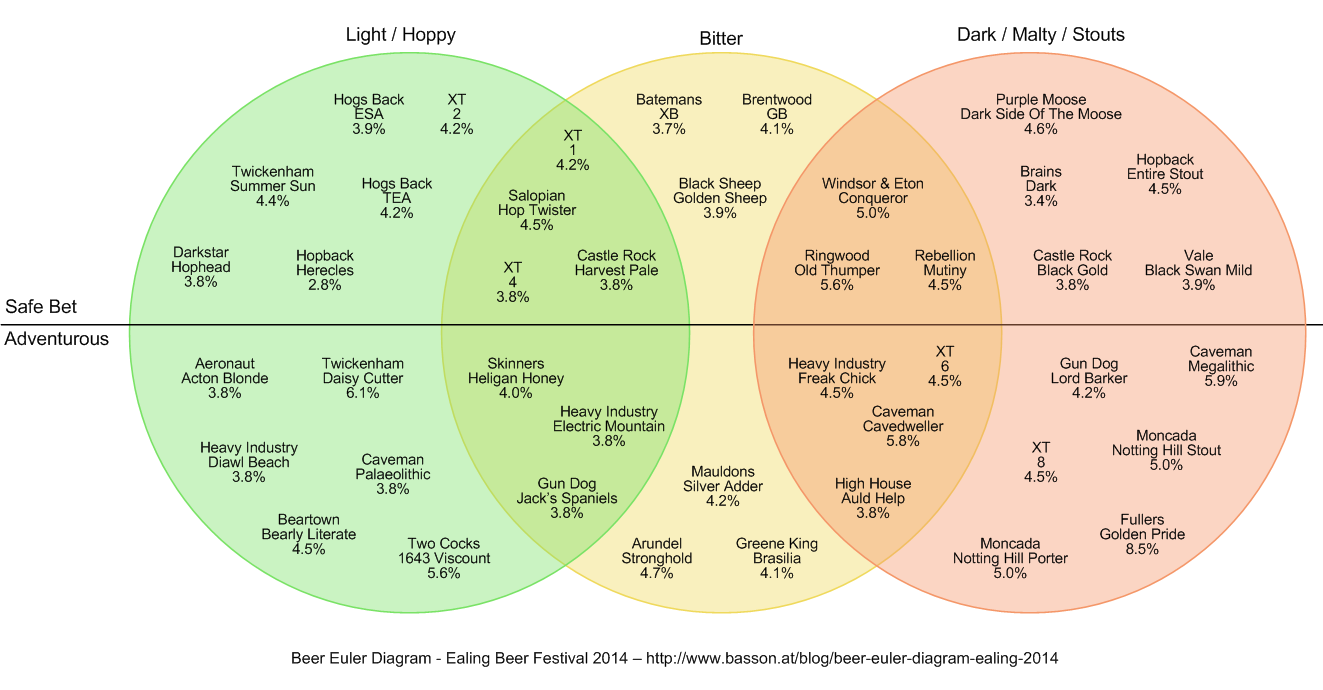 This approach has the benefit that all of my classification needs are satisfied, while cutting out the text in favour of placement within one of the diagram segments. A secondary bonus is that to make it look nice, I made a specific attempt to fill all of the segments, which means I've captured a much better variety of beers.

A potential disadvantage is that, for the vast majority of the beers on the list which I haven't ever tried, I'm inferring the section of the diagram based on the description. I'm sure there'll be some inaccuracies, but it's close enough to be useful.

If anyone is wondering, I used Microsoft Visio to create the diagram, but I'm thinking that in the future I might waste a weekend building something to programmatically generate it for me.

Last year this went down really well with others, and I personally found it much more useful than my previous text file lists. I'm hoping for similar results this year.

If anyone is interested (or at least as bonkers as I am), I've uploaded the Visio Template so that others can use it. I hope you enjoy your next beer festival as much as I'm going to!